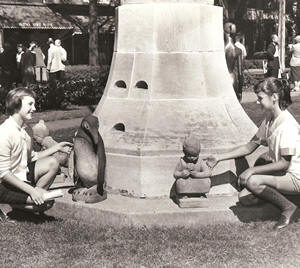 On September 22, 1954, “a handful of culture-minded residents (of Lake Forest and Lake Bluff.) with an intense desire to promote an active interest in the visual arts within this area” met and organized the Deer Path Art League. The 14-person meeting was held in the home of the first Mrs. Hayden Stuessy of Moffett Rd, Lake Bluff. They established the League’s purpose: “To stimulate, promote, and maintain interest in the visual arts, both from the standpoint of appreciation and creation.”

The first officers were elected at the second meeting held on Sunday, October 24, 1954, at the new Deer Path Public School, with 100 local people in attendance. Among the new officers was Mr. Boyd Hill, President, and shortly thereafter committee chairpersons were appointed which included an advisory committee of Mrs. E. W. Enthof, Franz Schulze, and Mrs. Sylvia Shaw Judson. Monthly Sunday afternoon meetings featured an art lecture or demonstration or workshop. By spring of l955, they started a 10-week series of art workshops on Thursday evenings, 7:30 – 10 p.m. in the art room of the Deer Path School, under the direction of Albert Pounian, artist and assistant professor of art at Barat College, Lake Forest. 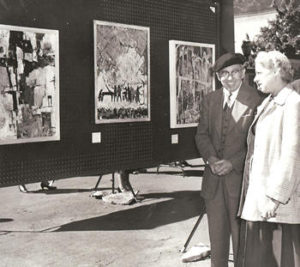 On June 12, l955, the last meeting and exhibit of the season, new officers were elected for ‘55-‘56. Mrs. Hayden Stuessy became the President, Committee Chairpersons were selected and the Advisory committee persons were Mrs. William. R. Odell, Sylvia Shaw Judson, Franz Schulze, Boyd Hill, Mrs. E. W. Enthof, and Franklin McMahon. At the meeting plans were made for the coming year.

Among their projects, the first outdoor exhibit in Market Square was scheduled for Sunday, September 11, 1955, from noon to 6 p.m., featuring 25 invited artists with added space for 50 Deer Path Art League Members. About 1,500 visitors strolled the art exhibit. The festival was quite successful, attracting many from the Chicago metropolitan area including Daniel Cott Rich, director of the Art Institute of Chicago; Mrs. Katherine Kuh, curator of the modern painting department of the Art Institute, and Mrs. Sam Marx , one of Chicago’s most famous art collectors. Many pieces of art including sculpture were sold. Enthusiastic exhibitors and visitors asked for another Art Festival to be planned for the next year. 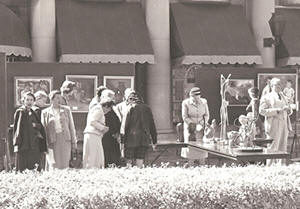 During the mid 1960s, very successful Spring Art Shows took place. One was the “Hairy Who” Show of Chicago artists including Ed Paschke staged by Board Member Marion Pawlick. Another was a DPAL Member Show at Triangle Park also featuring work of Lake Forest College Students and Lake Forest Garden Clubs Flower Show arrangements featured in the Lake Forest Library nearby. In following years until the early 1980s, Spring Shows of members’ art were held at the Lake Forest Club 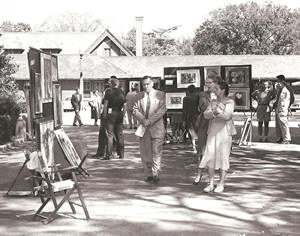 Each year there was a Deer Path Art League Fall Festival on the Square in mid September from noon until 6 p.m. In 1967, DPAL Board Member and Treasurer, Jackie Smith suggested the Fall Art Festival beheld on Market Square September 3 & 4, Sunday and Monday of Labor Day Weekend when all the shops were closed. That Art Festival was so successful the Board of Directors decided to make it a yearly happening!

A precedent was established and has continued to this day.